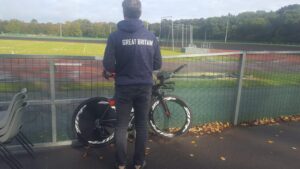 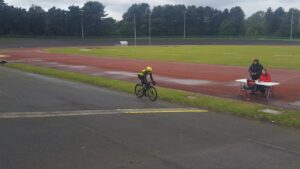 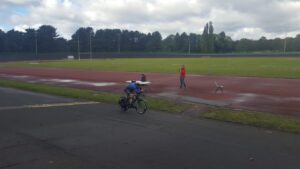 It has been a strange last 12 months during riding the 24hrs of Sebring in February. I was unfortunately in an accident while being in the lead group this resulted in being airlifted to Fort Pierce trauma hospital with a broken pelvis, punctured lung, multiple brakes to my ribs, collarbone and hand. I received fantastic rehabilitation whilst in America for a month.

Once I returned home, I began training for multiple races I had lined up for example race across America, British qualifier for the UCI Grand Fondo worlds and the world T.T. Championships at Borrego Springs but one by one these were cancelled.

After lengthy discussions with Quibell Park Stadium, Scunthorpe, England where Chris Hopkinson and Karen Taylor set their individual outdoor records a few years ago I was finally able to book the track, as we needed to ensure that the record attempts would comply with the Covid 19 cycling safety rules, for two consecutive weekends the 10th and 17th of October.

The first weekend I attempted the 2-man relay records with an excellent cyclist Mathew Hancox who I have known from my local bike shop Dynamic Rides. Matt stepped in at the last minute as my original partner was out of form. I have been coached by Matt Bottrill Performance Coaching. Being directly coached by Matt Bottrill who in 2014 rode the fastest ever British 50mile at 1:34:43 plus the 25mile at 45:43. Luckily for me he started cycling coaching and also set up Victor Campenaerts for his successful hour record last year and Tim Don for his successful Iron Man world record.

Equipment: I used my Scott Plasma 3 with a disk Zipp wheel and Matt said “he used his Giant Propel SL 1 Disc.”

Food: I had hydration tabs, coffee, clif energy gels and bars plus a rice disk. Matt said “he had Caffeine!, Pasta, Gels and Lucozade”

Best Part: Working as a team was good fun and not wanting to let anyone down. We brought a coffee machine which was great at each break. Matt said his best part was “the end because it bloody hurt!”

Hardest Part: It was blustery conditions and with some very heavy bursts of rain. Matt said his hardest part was “Rep4, starting to tire but still a long way to go. My power in this rep was 10% lower to the other reps.”