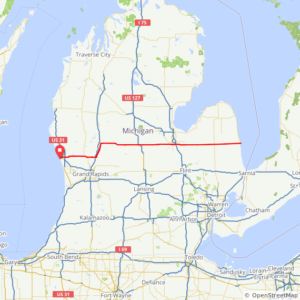 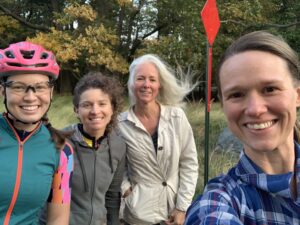 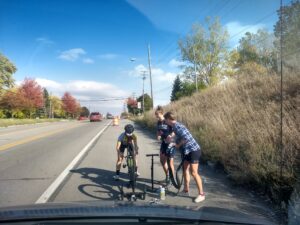 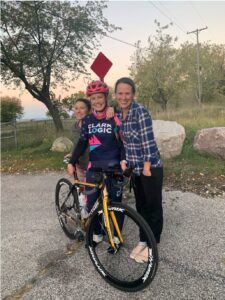 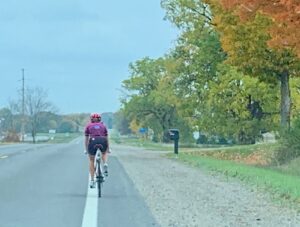 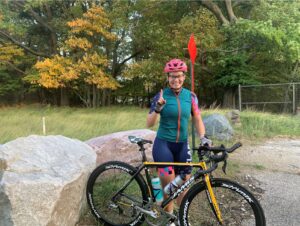 An here’s how it went:
From between the butt cheeks of dawn, on the morning of October 1Oh

, in the covid-19-stricken year of
2020, rose the three cyclists of the lsoceletes Quarenteam. There was Valerie (Litznerski) the Valiant
Vegan, queen of ultra-cycling, followed by Carolyn (Douglass) the Crafty Celiac, aspiring mom-mobile
maintainer, and finally Jillian (Howland) the Jolly Jack of all Trades. The official was officially known as
Officially Erin (Fouts), and unofficially, she still went by Erin.

These four quarenteammates hauled themselves, the clipboardAF and their steeds up to the still-totally-
asleep-town of Muskegon, Michigan to start their Michigan W-E-W (yeah, you read that right. .. both

directions) record attempt because there was nothing better to do on a perfectly normal day in October.
Almost kidding there, but they also wanted to solidify their comradery with this huge accomplishment. It
was pretty neat to be the first female team to even consider this feat, let alone demolish the ride with how
smoothly it went.
How did they get there? Well, they took the 31s highway established in Michigan to Sherman road, like
the ice cream you dummy, and drove west. At the end of Sherman road, the only things between the
riders and the brilliant water of Lake Michigan were sand dunes and washing machine-sized rocks. The
riders were highly satisfied to be starting as far west as they could practicably ride their bikes, since
“practicable” was the standard for bike positioning in Michigan.
After scrutinizing overthe prevailing winds and day’s forecast, the riders decided that an early start would
maximize tailwind… an obvious choice. So, these four, at 8:36am, sent Jolly Jilly off on the first leg of this
monstrosity of a ride. What did she encounter? A gravel road! Luckily, as the Jack of all Trades, she did
not tip over… not even close! Afterthat, it was smooth sailing for a solid 3mi before she made a wrong
turn! What the heck Jolly Jilly! Yes, apologies were accepted, but only after she careened her bike back
on track. Geez! How do you mess up going straight?
Then it was smooth sailing-a heavenly3⁄4 tailwind on the way to the shoreline of Lake Huron. So the plan
was this: Jillian ride 34mi, Valerie ride 34mi, Carolyn ride 34mi. .. that’s what happened. While Jolly Jilly
was riding, Valiant Valerie was prepping for her ride. In other words, she was eating a head of
broccoli. .. you know, vegan stuff, and Crafty Carolyn was driving her flashy (literally flashing) mom-mobile
with the resting steeds, and aboard was Officially Erin, studiously observing and documenting our efforts.
When Jolly Jilly hopped off from her first leg, Valiant Valerie took the reins and rode straight for a while.
Then Jolly Jilly drove the mom-mobile while Crafty Carolyn prepped for her ride. She did fewer vegan
things, but more GF consuming. The Valiant Valerie made a badass move and tried to add miles without
the quarenteam noticing-she succeeded, but then they had to figure out the most efficient way to correct
themselves. No biggie, more of a slowie. Then it was Crafty Carolyn’s turn on the bike, and Valiant
Valerie drove, while Jolly Jilly stuffed her face. She was not vegan or GF, so she could eat anything in the
mom-mobile. However, she refrained, because that would have been inconsiderate. Now, Crafty Carolyn
was the best at navigating so far…she made no wrong turns ever. EVER. Then the cycle
repeated…literally. JJ on, CC drive, VV ride, etc. you’ll catch on quick.
The steeds. Valerie the Valiant Vegan rode Sprout the uber small Fuji, Carolyn the Crafty Celiac rode

Ruby the Roadster, a cute Cannondale, and Jillian the Jolly Jack of all Trades rode JJ the Golden Bullet
of the new Jamis-Jamis model. They were bikes with aero bars. Nothing spectacular, but incredibly
special to each of the riders. Oh, the Officially Erin had her clipboradAF for all AF note-taking duties.
What did they eat? CAFFEINE, as well as veggies forthe vegan-literally broccoli-some kickass baked
oatmeal, lots of peanut butter, and mini bagels. Some cold pizza. More broccoli and probably some
carrots. They ate food. Normal, boring food… and twizzlers. The riders invented a new trick: pour-over
coffee in a moving car! Exactly zero drops were spilled of the precious bean juice. Lots of water was had
too. Nuun-ya business what else they consumed. What wasn’t eaten? Hot food. They braved the cold
warming themselves only with their hard efforts (like stupid hard), expertly layered clothing and coffee,
remember, it was made in a moving mom-mobile.
The best part was definitely not throwing up at the end of each ride for Jolly Jilly. Crafty Carolyn really
enjoyed being passed by a pissed-off SUVthat passed her IN THE GRAVEL SHOULDER. And Valiant
Valerie’s favorite time was whenever she got to eat her broccoli.
What was the hardest part–my word, do you have to ask?? HAVE YOU EVER COLLECTIVELY RIDDEN
ACROSS A STATE… TWICE?? But in all honesty, as a crew of female riders, finding bathrooms was the
most difficult part. Jolly Jilly definitely pooped in the woods, and showing a real commitment to staying in
motion Crafty Carolyn peed in a cup, in the moving mom-mobile. Bathrooms. Hardest part, easily.
As for unusual things occurring, how specific should the story get? If you’ve been paying attention, CC
almost got mauled by an impolite motorist passing in the gravel, on the right side of her. CC also peed in
a cup, in a moving vehicle. JJ pooped in the woods and survived the ride on twizzlers. VV got a flat in
Sagnasty–all three worked in perfect harmony to change that flat and be on their way quickly again–and
she eats broccoli like a moose eats a shrub.
So the first record attempt finished at Lake Huron-you just drive the 46highway established in
Michigan until the road ends. It will literally dump you in the lake if you’re not careful. With the wind now
miraculously coming from the east, the riders whipped their beast (PSV) around at that point to enjoy
some more tailwind. The quarenteam rode the exact.same.route.back.to.where.they.started. Original,
right? Believe it or not, yes, completely original. No one had ever done that in their state. For good reason
too, it’s mostly corn past the midpoint of the state. Fun fact! No one is allowed to hate on the State of Ml
unless they live there. And if you can’t remember where the riders started, then scroll up.
So, then they rode all the way back. In the dark. It got kind of cold. But they kept riding. The same route,
in reverse. JJ rode, CC drove, VV prepped. VV rode, JJ drove, CC prepped. CC rode, VV drove, JJ
prepped. And by prepping, sometimes it was sitting without pants on, other times it was eating anything

that sounded good, and if they were lucky it included SLEEPING! Whaaaaat? Yeah. Bomb-diggity-kick-
ass sleep! The last segment of Crafty Carolyn’s was cut short by some frigid toes, and JJ came to the

rescue. Or rather was forced to because she was next in line to ride. Twenty sixe (26) freakin’ more miles
to go. An entire marathon! She rode them. She wants to puke about 80% of the time, but she planned her
work week (cause that’s more exciting… ?) while dreaming of burgers, pizza, oranges and waffles. Her
last wish came true! Crafty Carolyn said she could get waffles when she finished, so she rode as fast as
her sleep-deprived body could take her and the Golden Bullet. Then the sneaky vegan said there was a
segment, ahead, which she knew Jolly Jilly couldn’t refuse. She got it (duh), with encouragement from her
favorite song played for the whole neighborhood to hear as she finished the last mile.
Jolly Jilly did not blow the last stop sign, and they cried, were merry and happy, and veeeerrrry tired, as
they realized they completed the quest. They finished at 7:46am on October the 11. How far? 425mi.
(whoa) 23 hr 10 min…that’s over 19 mph. Take that suckazzzzz.
They made one last valiant effort. Waffles! They did not fall asleep while chewing their waffles. No
amount of whipped cream or strawberries ended up on anyone’s laps. The vegan inhaled her sad cup of
fruit and Officially Erin declined bribery with the food…weird