Congratulations to the brothers Samuel and Claude-Alain Gailland, who set the following records at the 200 meter CMC Aigle track in Switzerland: 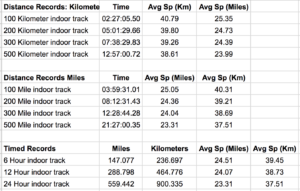 You can read the summary report below the pictures

Name : Gailland bro’s 24h indoor track project 2 men’s relay
Records: 100km-200km-300km-500km- 100miles- 200miles- 300miles-500miles- 6h- 12h-24h
Gailland Claude-Alain 45 years old
Gailland Samuel 43 years old
Date: December 18, 2018 at 12:00 p.m. until December 19, 2018 at 12:00 p.m.
Location: UCI Indoor track – Aigle-Switzerland (200m long)
The conditions were a little cold (16°), pleasant to drive but not hot enough during the breaks.
The lighting on the track was perfect and the notice board very easy to read.
We used a professional timing system that indicated to the nearest thousandth of a second the
time of each lap, the total number of laps, the speed in km and miles and the average speed.
Everything was recorded on a second backup system. We also started a manual emergency
stopwatch but we didn’t need to use it.
First of all, we wanted to share a sporting challenge between two brothers who were
passionate about sports and cycling. The idea of setting a record came about by doing some
research and finding that there was no world mark on a two-person relay track. Our dream
was to drive as close as possible to 40km/h
We decided to use real fixed gear track bikes. Our partner Scott has manufactured bicycles for
us on a plasma frame basis. We fitted extensions to the handlebars and opted for a solid rear
wheel and a front baton wheel. The ratio was 49/15 at the beginning and then 51/16

Our plan was to take turns driving and at the last minute of the relay, the other runner started
to gain momentum and made a 200m draft lap before the first runner pulled away and
stopped.
Samuel started first and the idea was to do 15-minute relays, after a few hours and an average
of more than 40km/h, we dropped to 12 minutes and then 10 minutes.
During the night we did some 20-minute shifts to allow the other person to shower and rest a
little bit.
During the last two hours we did short relays of 9 minutes. We each did 63 relays and we
underestimated the difficulty of relaunching each time.
The breaks were very short and we just have time to drink, go to the toilet and have a few
small massages. We mainly consumed drinks and few solids and only during breaks.

The best part was the departure because we had been waiting for this moment for 6 months.
The most difficult was after 11 hours of racing and also at the end of the night.

Fortunately, no falls or other incidents occurred. Only one slow puncture but otherwise no
mechanical problem. No problem with the regulations.
In short, it was a very beautiful sporting adventure between two brothers. We are amateur
athletes and we worked in our jobs one day before the challenge and directly 1 day later too!
We have a lot of respect and admiration for the solo performances of Christophe Strasser and
Marco Baloh.